The vertebral column functions to support body weight, give protection to the spinal cord, and as a site of muscle attachment. The column is typically made up of 33 segments called vertebrae (singular vertebra), which share a common structure. These vertebrae are grouped into five classes from superior to inferior: cervical, thoracic, lumbar, sacral, and coccygeal.  The vertebral classes are differentiated by their location in the column and their typical morphology.

There are seven cervical vertebrae in the neck region.  Inferior to the cervical vertebrae are the 12 thoracic vertebrae, which are in the region of the chest and articulate with the ribcage.  Inferior to the thoracic vertebrae are the five lumbar vertebrae.  The cervical, thoracic and lumbar vertebrae are made up of separate skeletal elements which are all separated from each other by intervertebral discs.  These discs are composed of fibrocartilaginous rings (anuli fibrosus) surrounding a center disc (nucleus pulposus). The discs act as shock absorbents during locomotion. As more of the body’s weight is borne lower in the back, these discs become larger and thicker as you move from the cervical region to the lumbar region. The two most inferior units of the vertebral column are made up of vertebral segments that have fused together to form a single mass: the sacrum, which articulates with the os coxae to form the pelvis; and the coccyx, which consists of four coccygeal vertebrae which are fused together to form the vestigial human tailbone.

Vertebrae are identified using a system of abbreviation which includes a letter and a numeral.  The letter (C, T, L, or S) refers to one of the regions discussed above.  Note: coccygeal vertebrae are not commonly referenced individually, so the C refers to cervical, not coccygeal. Within each class the vertebrae are numbered from superior to inferior, beginning with the number 1.  Thus C1 is the most superior cervical vertebra, while T12 is the twelfth (i.e. most inferior) thoracic vertebra. 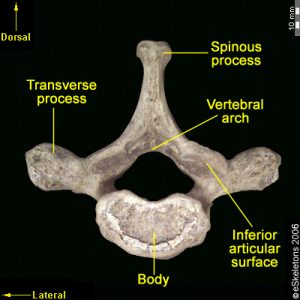 In general, vertebrae share a common morphology regardless of which vertebral class they belong to.  Each vertebra has a ventrally placed cylindrical body or centrum.  It is the body which transmits the majority of body weight, and which is separated by a fibrous disk from the adjacent bodies.