The skull is comprised of the 14 bones of the cranium, the mandible, and the hyoid.

The bones of the cranium articulate with each other by way of sutures, which are fibrous joints between two interlocking denticulate edges which allow very little movement. This type of joint is very different from the more familiar synovial joints, highly mobile joints encased by a sac and lubricated with fluids. Most familiar joints such as the knee, elbow, and hip are synovial joints.  The only synovial joints in the skull are the jaw joint and the articulations of the tiny auditory ossicles.  The sutures between bones of the cranium are most evident in young individuals.  Over time the bones fuse together such that some sutures in extremely old individuals are virtually invisible. 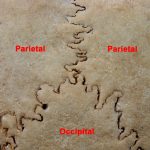 For other on the 14 bones that make up the cranium, visit eSkeletons.

The mandible, or lower jaw, holds the lower teeth; its primary function is in chewing food.  The mandible consists of two paired bones (hemimandibles) which, in humans, fuse together after birth to form a single bone.  Many other mammals retain unfused hemimandibles throughout life.

The mandible consists of a horizontal portion, the corpus, and a vertical portion, the ascending ramus. The corpus bears alveoli which anchor the teeth in place.  At midline where the two hemimandibles are joined the mental protuberance, or the chin, projects anteriorly from the inferior margin of the external surface of the corpus.  Just superior and posterior to the chin lies the mental foramen.  The interior surface of the corpus bears several mental spines near the midline.  Just posterior to the spines, the mylohyoid line courses obliquely from inferior to superior.  This line provides the attachment for the mylohyoid muscle.

The angle where the ramus meets the corpus is termed the gonial angle.  The edge of this angle bears the roughened masseteric tuberosity, the insertion site of the masseter muscle. The ramus rises superiorly and ends in a condyle situated posterior to the coronoid process.  The process is separated from the condyle by the mandibular notch.  The condyle forms the lower half of the joint whereby the mandible articulates with the glenoid fossa of the temporal bone.  The variably shaped coranoid process provides the insertion point for the temporalis muscle.    The interior surface of the ramus is decorated by the mandibular foramen, a large hole which pierces the ramus obliquely. This foramen transmits the inferior alveolar nerve and vessels.

The hyoid bone is the only bone in the body that does not articulate with another bone.  It sits atop the thyroid cartilage in the neck, suspended by ligaments from the styloid process of the temporal.  The hyoid is horseshoe shaped, with the horseshoe opening posteriorly.  The body of the hyoid occupies the central portion of the bone.  From the body, the greater horns emanate to form the sides of the horseshoe.  The lesser horns are projections from the superior surface where the greater horns meet the body.  The hyoid provides the attachment site for a variety of muscles and ligaments of the neck, mandible, and thorax.
©eForensics 2022