The eight carpal bones are small, compact, irregularly shaped bones arranged in two rows.  From lateral to medial, the proximal row consists of the scaphoid, lunate, triquetral, and pisiform.  The distal row, from lateral to medial, includes the trapezium, trapezoid, capitate, and hamate.  The trapezium, scaphoid, hamate, and pisiform each serve to anchor a fibrous band of tissue known as the flexor retinaculum.  The retinaculum forms the carpal tunnel, through which the flexor muscles pass from the lower arm to act on the hand. 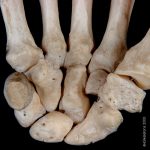 Because each carpal bone has such a distinct shape, they are not easily confused with one another.  However, as the shapes are extremely irregular, they can be difficult to master.  Each carpal (except the pisiform in some cases) can be sided unambiguously by identifying the facets for other carpals and applying your knowledge of the anatomical relationships between the carpal bones.  Even so, because of the complex articulations of these bones positional siding “tricks” can be especially useful for carpals.

Return to the metacarpals or manual phalanges.

Siding:  Position the bone in proximal view, with the convex facet for the radius facing you, with the tubercule pointing up.  The tubercule is on the side from which the bone comes.

The smallest of the carpal bones (actually a sesamoid bone), the pisiform is a pea-shaped bone bearing only a single articular facet for the triquetral.  The pisiform serves as an attachment site for the flexor retinaculum.

Siding:  The pisiform cannot always be accurately assigned to side, although the lateral surface usually bears a small grove for the ulnar artery.

The trapezium is distinctive due to its large, saddle-shaped, distally oriented articular surface for the first metacarpal and its elongate palmar ridge for the attachment of the flexor retinaculum.  The small proximal facet for the scaphoid meets the larger medial facet for the trapezoid at an obtuse angle.

Siding:  Orient the bone such that the saddle-shaped articular surface for the first metacarpal is away from you and the laterally-positioned palmar ridge is up.  This ridge will be on the side from which the bone comes.

The trapezoid is a small bone which is often described as boot-shaped.  The broad “sole” of the boot is the dorsal surface.  The bone tapers to a point on its palmar surface.  The most pointed corner of the  dorsal surface (formed by the facets for the trapezium and scaphoid) is proximal and lateral. The distal aspect of the bone bears a wedge-shaped facet for receiving the saddle-shaped base of the second metacarpal.  A small facet for the capitate is visible on the medial side of the bone.

Siding:  Orient the “boot” with the “sole” down with the V-shaped junction of the second metacarpal and trapezium facets facing you.  The boot will point to the side from which the bone comes.

The capitate is the largest of the carpals.  It has a rounded head on its proximal end which articulates with the concave portions of the scaphoid and lunate.  Distally the capitate has a broad base which articulates primarily with the third metacarpal, though there are smaller articulations with the second and sometimes fourth metacarpals.  The medial side bears an articular surface for the hamate which runs the full proximal-distal length of the the bone.  The lateral side bears a much smaller facet for the trapezoid.  The dorsal and palmar surfaces of the bone are non-articular.

The hamate is distinctive due to its hook-shaped hamulus, which projects from the proximal-medial corner of the palmar surface of the bone.  The hamulus is an attachment site for the flexor retinaculum. The proximal end of the hamate bears a slightly convex, broad articular surface for the fourth and fifth metacarpals.    The lateral surface bears a large articular surface for the capitate, while the medial surface has an irregularly shaped facet for the triquetral.

Siding:  Position the bone such that the hamate is up, and the metacarpal articular surfaces are away from you.  The hook of the hamate leans towards the side from which the bone is from.